In her statement on October 1st, Everett Mayor Cassie Franklin announced that in the wake of planned layoffs at Boeing, the city would be collaborating with organizations like Everett Community College, Washington State University, and the Northwest Innovation Resource Center to “retain and tap into the skills of displaced workers”. This week, the mayor’s office released their collaboration plans for two of the three institutions: the Northwest Innovation Resource Center and Everett Community College. Mayor Franklin’s plans to offer laid off workers one of two choices so far:

Attend an IT Boot Camp

The proposal with Everett Community College is an “online, self-paced, student centered IT Boot Camp” meant for “those impacted by COVID-19”. Boeing workers will need to compete with other prospective students to be accepted into a six week program that teaches tech-related subjects like networking, security, and other “core fundamentals”. This $52,000 program will give ten—maybe twelve!—lucky people the chance at a tuition-free college-level course to “tap into” their skills, as the mayor said.

The city is also preparing to collaborate with the Northwest Innovation Research Center (NWIRC) to create a program called “Project Reinvent”. The $22,700 project is a “small business retention and recovery program” that targets “business innovators”. These so-called innovators will be assisted with access to a “regional talent of dislocated workers” along with Project Reinvent’s efforts to “provide an opportunity for dislocated workers to share their extensive knowledge and skills to improve the success level of existing small businesses”. In order words, NWIRC’s Project Reinvent is a recruiting program to help “small” businesses hire laid off workers.

This aggressively neoliberal project’s ambitions may sound nice, but it’s really just another plan to funnel public dollars into private hands to do whatever they want with almost no accountability. The project’s goals include meaningless achievements like “increase innovative start-up activity” and “expand entrepreneur experience of dislocated workers and recent graduates”. Entrepreneur experience! What? 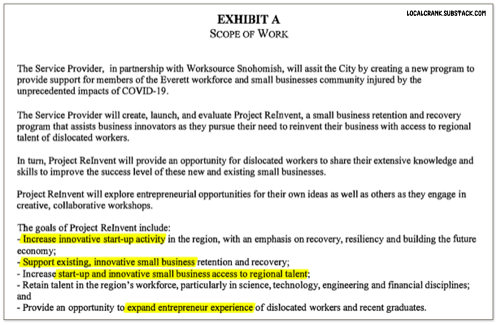 The agreement includes no provisions about expected results or return on investment. The City is not obligating any review of Project Reinvent nor how well it actually assisted laid off Boeing workers. Remember this was all supposed to be about helping them, right? This is plainly a giveaway to a non-profit whose mission statement is “creating economic opportunities and jobs through innovation”. Just absolutely devoid of any real, meaningful purpose and instead is filled with startup buzz-worthy phrases like “50% increase in the number of entrepreneurs served”. What does that even mean?

How much money will workers who were laid off from Boeing get from the City of Everett? $0.

This is bleak, and this is shameful. This is as far as the imagination goes for Everett’s leadership, apparently. About a 120 miles away, in Vancouver, British Columbia, the mayor and city council unanimously approved a program of sending $7,500 in cash directly to unsheltered people. The result?

Sadly the only sort of things that the mayor and city council in Everett can unanimously agree on is giving the cops drones and temporarily banning supportive housing. We’re going to need a whole lot more than IT boot camps and innovation centers where this city, economy, planet are headed.